Ancient sacred spaces like Stone Circles/Medicine Wheels are surprisingly common across cultures and millennia. There are literally hundreds of religious stone rings, including Stonehenge [1], the medicine wheels [2] all over the western US, “mystery hill” http://en.wikipedia.org/wiki/America%27s_Stonehenge, Avebury, and many more. In fact, they are found on every continent except for Antarctica. Here are some pictures (you could spend days on all these sites: [3]). You might like to check out some of the dozens of circles, both ancient and new, at some of these sites. (here are new circles in Arizona: [4] and in Pennsylvania [5] )

Your circle can be used for the Sabbats, spontaneous spiritual practice, and for daily practice. For instance, I see the sun at a certain angle in my stone circle during the day, and momentarily reflect on that postion (say, south east), so I may reflect on my day, thinking – south east, the beginning of the plans for the day – like Beltane, when the work of the summer is just beginning. My work for the day has started, and most of it lays before me. – It can be a kind of centering.

You may also have a central flame. Use a rock with a flat area on top for the stone for the center of the circle. Use a large carbide bit in a hammer drill to hollow out a central area around the size of a measuring cup. If possible, leave a few “posts” of rock from the spaces between the drill holes. If they all break off, then use a smaller bit to make little holes, then screw metal screws into them. Then drape a few scraps of old blue jean material over the posts. Put a chunk of wax on the cloth, and light it, allowing the wax to melt, soak the cloth, and fill the cup shaped hole. Blow it out (better to smother with aluminum foil), and let it cool. Now it can be lit anytime, and you just need to add more wax from time to time. The posts are to keep the wick from sinking into the wax.

Another idea that can be used is planting trees around it with a different species at each of the 8 stones. The species can be picked so as be special during their correct time. For instance – the circle below has burningbush by the North West stone, because they turn a firey red around Samhain. 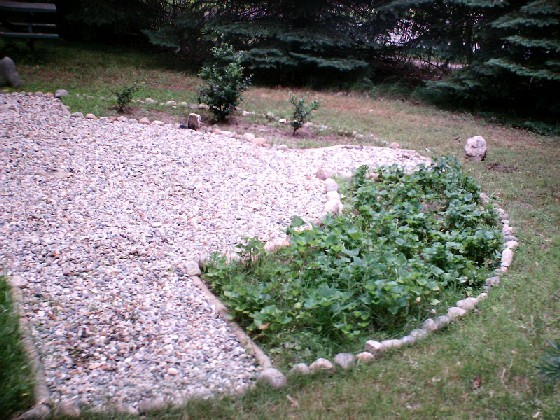 Retrieved from "https://evolutionaryspirituality.fandom.com/wiki/Making_your_own_Stone_Circle_(Sacred_Space)?oldid=1366"
Community content is available under CC-BY-SA unless otherwise noted.